9 young people have recently returned from this year’s sailing expedition! They had to battle some rough waters and bad weather, but they all pushed through to the end. The expedition was made possible thanks to various funders, ensuring the trip was fully covered! Funders who supported this years’ expedition were: St. Hilda’s Charitable Trust, YMCA North East Discretionary Fund, Tesco’s Bags of Help Fund, BBC Children in Need and an award from the High Sheriff of Northumberland scheme. The expedition provided all young people with a once in a lifetime experience. Young people met the crew of 5 who would be supporting them all week. The crew gave everyone a tour of the boat, explained how everything worked and made sure everybody was made aware of any potential risks and dangers to keep themselves safe! Although it began raining shortly after setting sail, young people kept on sailing to reach their destination.

Young people were split into two watches, taking turns every 3 hours to carry out various duties which included: steering the boat, hoisting the sails and keeping an eye out for other boats or lobster pots. Young people also took turns cleaning the boat and cooking meals, skills previously developed through our independent living skills programme. Once hitting the open water, the sea became extremely rough and everybody felt extremely sea sick; they almost ran out of buckets! Due to many of the crew 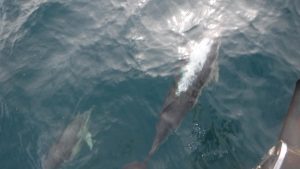 feeling ill, plans changed and the boat headed for Vatersay on the Isle of Mull. As the boat approached the shore, the waters calmed, the sun came out and the boat got surrounded by 20 dolphins who began swimming alongside. This lifted everybody’s spirits and made them feel much better.

The following morning, young people took the dingy to shore and spent an hour on dry land, admiring their surroundings. Back on board, the water was much calmer and everybody had found their sea legs! Young people worked effortlessly together and quickly got to grips with what needed to be done, which ropes needed to be pulled and how to steer on course. After sailing for a while, the boat reached its destination of Tobermory (where the TV show Ballamory was filmed)! The boat was not able to get a berth, so the crew had to anchor until morning. The next day, young people went ashore to explore the area. They met locals in a café and discussed the expedition with them.

Everybody re-boarded to begin the journey back to Oban, providing them with time to practice their steering and putting the sails up and down. It also provided enough time to practice some man overboard exercises. Luckily for the young people, none of them had to take the plunge; that was the Bosun’s job! By the time the boat arrived at Oban it was very late, so everybody got some rest for the final day. Everybody worked hard to clean the boat and did so with minimum complaints! Everybody was sad to leave the boat and each took something positive away with them from the whole experience. 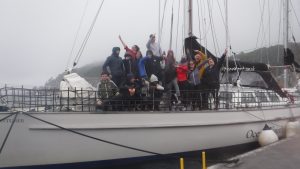 Youth workers noted that for some individuals it was a great personal achievement, learning that though times can be tough, it’s always good to keep trying as things usually get better! It was also noted that the group really bonded and had a great sense of achievement. The youth workers also felt they got to know all young people on the trip a lot better too and were able to see what each individual gained from the experience.